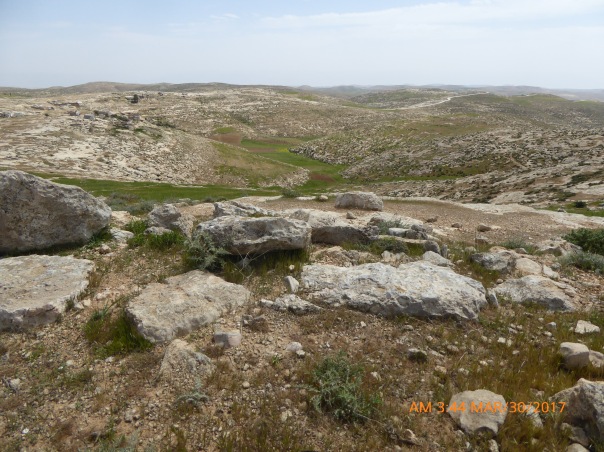 To walk in the SHHs is one of the reasons I came here. I suppose I thought that walking there again would be a time of reflection/meditation. I arrived in Yatta after being for a few hours in Hebron. There I walked to the old city and once again saw the craziness that is Hebron. Took a picture of the nets above the shops. They are there because the Israelis living above throw their garbage down on the shopkeepers and their wares. Hebron has a settlement in the middle of it and to accomplish that, the Israelis closed the economic centre of the town (Shuhuda Street) and homes, etc. It was replaced by barriers and checkpoints. EAs accompany children to school since they need to go through checkpoints which is dangerous at time. Their bags are checked day after day no matter their age. Many young people have been killed by soldiers. One recently was a 15 year-old girl. According to a shopkeeper close by, one of the soldiers talked to her in Hebrew, probably wanting her backpack. The girl did not understand so started shaking. She was shot 5 times because she was acting suspiciously. The soldiers did not call an ambulance but watched as she bleed to death. I know, hard to believe this goes on.

Back to Yatta. I arrived at Abed’s home in the late in the afternoon. After eating, we went to see the progress on the guest house he is building with investment from Christian and Laura, who were my teammates while an EA. I took pictures to send to Laura. Afterwards we went to see a man in one of the villages. Abed got two lambs from him. He says the keeping the sheep and hens in the first level of his home gives his mother something to do. I think Abed though is a farmer at heart. His father seems to divide his time between Yatta and the village of Susiya.

The next morning I left early for At-Tuwani to start my walk from there. I first talked to a couple of young people from Operation Dove who live there and do much of the same work as EAs. They warned me about walking by myself. My biggest fear was dropping dead and the Israelis doing something to make it look like the Palestinians were responsible. That would reinforce the narrative that it is dangerous for tourists to come to the West Bank and the Palestinians are all terrorists. I decided to go ahead but skipped going to the outpost. I took my time since it is strenuous going up and down. Rocks and stones shift under foot. I sat for awhile in the shade of the cement pillar on which is written: “Danger. Firing Zone. Entrance Forbidden.” From that vantage point I could see part of the Israeli Maon settlement and Maon Farm. Then there was an Israeli outpost which eventually become settlements. And then a village. No greenery, no running water, just makeshift shelters. Walked some more and neared the village of Um Faggara. Two children waved for me to come. They put a mat on the floor for me to sit and not long after, the tea pot and cups appeared. I had a bag of nuts in my backpack which I gave to the children to share.  I had several cups of tea with mint – keep in mind that the cups are smaller than the mugs  we use. Their home had no beds, just mats and not a single toy. A teenage girl who was going to university had a computer. Electricity was by way of a solar panel donated by COMET. No table or other furniture.

I visited three more villages before heading to the main road. Army vehicles passed but did not stop or did not see me. Nearing Susiya, I encountered a man leading some sheep The sheep saw me and came to where I was despite the protests by the shepherd and the swishing of his rod. When I stopped, they all gathered round me. It took me walking to where he was for the sheep to finally go back with him.

In Susiya, I met Nassar and had a meal at his “home”. He told me of recent events in the efforts to save the village. Right now there is a bit of a reprieve since it will be two months before the court decision once again. However the army has orders to demolish the village so one never knows. There are many supporters and still international pressure to save the village. While there, three Israelis came. They come to show that not all Israelis agree with what is going on. It would be good if the village could get a “Master Plan” which would mean that they can build without fear of demolitions. Mahmoud and Nassar drove me to Abed’s home in Yatta. Despite Abed’s protests, I decided to catch a minivan back to Hebron and on to Bethlehem.

Posted on March 29, 2017, in Visiting the West Bank once more. Bookmark the permalink. 1 Comment.

Accompaniment in Palestine and Israel

In the West Bank

A Mosaic For Peace

this blog will describe my journey as an Ecumenical Accompanier with the World Council of Church's Ecumenical Accompaniment Programme in Palestine and Israel from September to December 2011, from February to April 2013, and my volunteer work with the Hebron International Resources Network in 2014 and 2015